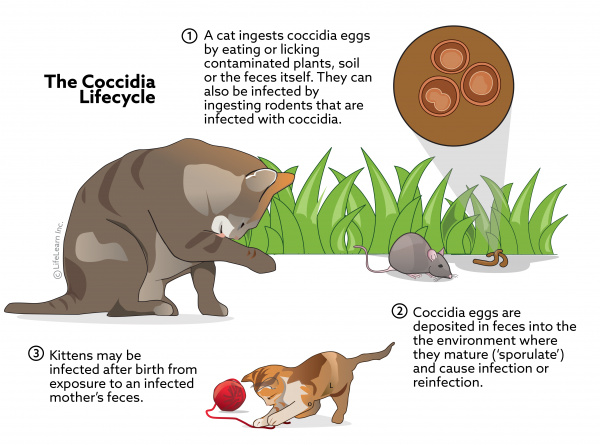 Coccidiosis is an intestinal tract infection caused by a one-celled organism (a protozoa) called coccidia. In cats, most coccidia are of the genus (group) called Isospora. Isospora felis and Isospora rivolta are the most common species of coccidia in cats. Because coccidia live in the intestinal tract and can cause diarrhea, they are often confused with intestinal worms, but coccidia are not worms. They are microscopic parasites that live within the cells that line the intestine.

How did my cat become infected with coccidia?

Your cat most likely became infected with coccidia from swallowing oocysts (immature coccidia) that are found in cat feces and any environment contaminated with feces. Oocysts are passed in the stool of an infected cat. They lie in the environment and eventually mature (‘sporulate’) into a more developed oocyst that can cause infection or reinfection. Sporulation can occur in as little as six hours, but usually takes seven to ten days. Sporulated oocysts are infectious for other mammals, such as mice, as well. If a cat swallows the oocysts, they mature in the cat's intestine to complete the life cycle. If a mouse swallows the oocysts, they encyst in the mouse’s organs, and a cat may become infected by eating the infected mouse.

Kittens are commonly diagnosed with coccidiosis, but are not born with it. After birth, kittens can become infected from their mother with exposure to her feces, especially with the tendency of kittens to explore. Coccidiosis is of particular danger for kittens, since their immune system is underdeveloped. If the mother is shedding oocysts, her babies can ingest them during nursing. Since young kittens (less than six months of age) have no immunity to coccidia, the organisms can reproduce in great numbers which may have serious consequences.

"A cat may become infected by eating an infected mouse."

It takes about thirteen days for illness to develop after the kitten first ingests coccidia. Consequently, kittens that become sick from a coccidial infection are at least two weeks old. Although most cases are the result of infection from the mother, this is not always the case. Any infected kitten is contagious to other kittens. In breeding facilities, animal shelters, kennels, and other areas where numerous pets may come into close proximity with one another, it is wise to isolate infected animals from those that are not.

What are the clinical signs of coccidiosis?

Many cats that are infected with coccidia do not have diarrhea or any other clinical signs. When the oocysts are found in the stool of a cat without diarrhea, they are generally considered a transient, insignificant finding. However, in kittens and debilitated adult cats, coccidiosis can cause severe, watery diarrhea, dehydration, abdominal distress, and vomiting. In severe cases, death may occur.

How is coccidiosis diagnosed? 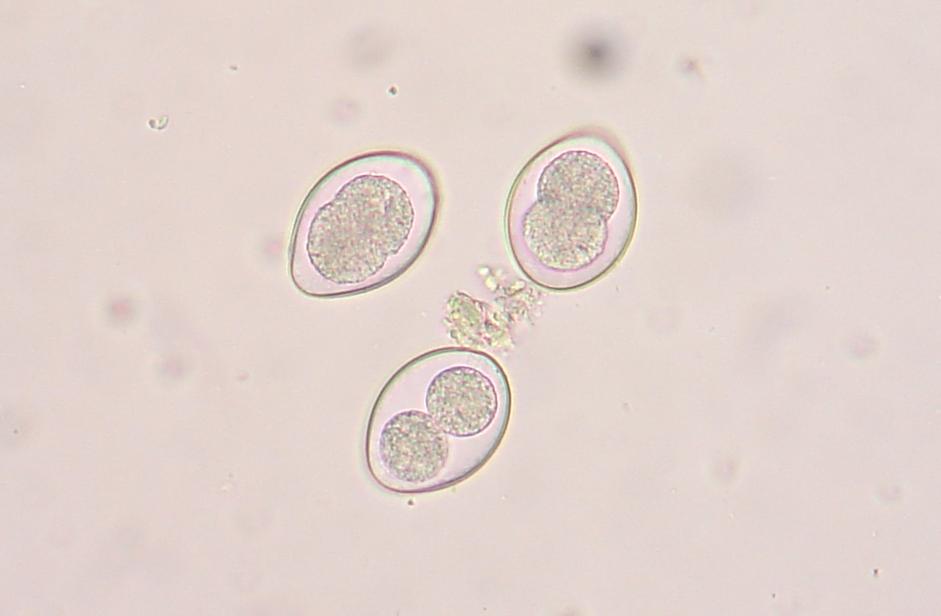 Coccidiosis is diagnosed by performing a microscopic examination of a stool sample. Since the oocysts are much smaller than the eggs of the intestinal worms, a very thorough evaluation must be performed. Infection with some of the less common coccidial parasites may be diagnosed with a special blood test.
Image via Wikimedia Commons/Joel Mills (CC BY-SA 3.0.)

How is coccidiosis treated?

The most common drug used to treat coccidiosis is a sulfa-class antibiotic, sulfadimethoxine. It is typically administered for 5-20 days. Some formulations of this medication are pleasant-tasting and most cats will readily accept them. If the sulfa drug is not effective, other treatments are available. Additional supportive treatments may be needed if diarrhea and dehydration occur.

Cats are frequently reinfected from the environment, so disinfection is important. The oocysts are very resistant to environmental conditions and disinfectants. The use of diluted chlorine bleach [one cup (250 ml) of bleach mixed in one gallon (3.8 L) of water] is effective. Be sure to test clean a small area of any affected materials since bleach can damage many surfaces. Steam cleaning may also be used to destroy oocysts. Be sure to remove any feces as quickly as possible form the environment to prevent reinfection.

Can I get coccidiosis from my cat?

The most common species of coccidia found in cats do not infect humans. Some of the less common species, however, are potentially infectious. One of these organisms, Cryptosporidium, may be transmitted by cats to people, especially those with compromised immune systems. Cryptosporidium has also been found in public water supplies in some major cities. Another organism, Toxoplasma, is of particular concern to pregnant women because of the potential to cause birth defects. However, most human cases of toxoplasmosis are the result of eating contaminated meat as opposed to contact with cat feces. These two coccidial parasites pose an increased health risk for immunosuppressed people (i.e., HIV patients, those taking immune suppressant drugs, cancer patients, and the elderly).

"The most common species of coccidia found in cats do not infect humans."

Good hygiene and proper disposal of feces are important in minimizing the risk of transmission of all feline parasites to humans or other animals.

© Copyright 2018 LifeLearn Inc. Used and/or modified with permission under license.